A mother of 7 donates a kidney to 8-year old she doesn’t know, and saves the girl’s life.

A usually healthy child, Pari’s condition deteriorated to life-threatening kidney failure due to a congenital disease of which all were altogether unaware; the kidney transplant was conducted at SCMCI via the “Matanat Chaim” (lit. Gift of Life) Charity 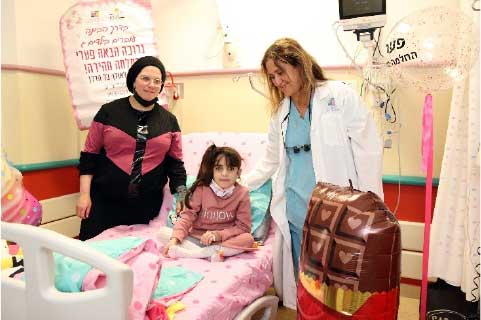 Chaya-Parel (Pari) Sarota, aged 8, from Betar Illit, looked healthy to her parents during the first years of her life, until, following a mild illness about a year ago, it was discovered that she was already in terminal renal failure and required dialysis. Findings revealed the cause of her kidney impairment, which stemmed from abnormal development of her kidneys while she was still in the womb, which no one dedected up until then.

Last week, Pari underwent life-saving kidney transplantation at SCMCI. Hadas Shimmel, 44, a mother of 7 children from Ariel, is the altruistic donor who donated her kidney and saved Pari’s life. Hadas started the process through the non-profit Matanat Chaim and was found to be a match for Pari.

Hadas describes her decision: “Three years ago, my husband, Yair, donated his kidney to a young man and saved his life. This was a strengthening experience for him. Every life saved is thrilling, but there is something about saving a child’s life whose entire future is ahead, and represents a powerful experience in giving.”

Rachel, Pari’s mother, said that “Pari’s illness fell on us like thunder on a clear day. From a totally normal child, I saw her become a very sick girl. As the parents of 11 children, it is difficult to function in a situation in which she needed dialysis treatments three times a week. So the courgeous donation we received is not only saving the life of one person, but also that of the entire family caught in crisis. We have no words to thank our angel donor for her deed. We ask also to thank the entire medical team at Schneider who accompanied us hand-in-hand throughout the process, alongside exceptional professionalism and humanitarianism.”

SCMCI is among the few pediatric centers in the world capable of conducting a large number of organ transplants. Transplantation of a living-donor kidney is a complex procedure requiring special preparation by the medical teams which comprise pediatric organ transplant surgeons, nephrologists, anesthetists, ultrasound technicians, operating nurses, intensivists and more. As part of the surgery, both donor and recipient are wheeled into their respective operating rooms simulaneously. Initially, the kidney is removed from the adult donor, and transferred to the adjoining room for transplantation into the child.

SCMCI performs the majority of organ transplantations in children in Israel. Since its establishment, over 700 heart, lung, liver and kidney transplants have been conducted in infants, children and adolescents with a success rate on a par with leading institutions in the world.